Cool roofs are among the most popular options for roofing in the state of California. Known for their ability to absorb and reflect heat, cool roofs prove to be very useful especially during California’s very hot summer. An article by Davie Biello in Scientific American discusses the potential of cool roofs in helping combat global warming, as found in a recent study: 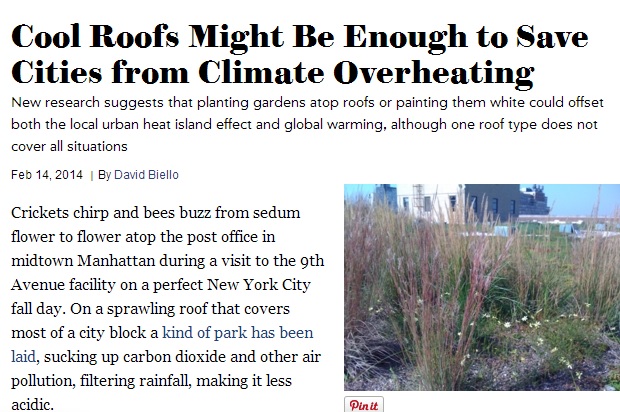 “A large enough number of such roofs could “completely offset warming due to urban expansion and even offset a percentage of future greenhouse warming over large regional scales,” says sustainability scientist Matei Georgescu at Arizona State University, who lead the research. That conclusion contradicts previous findings by researchers from Stanford University, who found that reflective roofs actually might increase global warming.

Roofs have quickly become a sticky subject, touted by some, such as former U.S. Secretary of Energy Steven Chu, as one solution to global warming. That’s because cities are hot places. As buildings replace forest or grasslands, the local temperature rises—the so-called urban heat island effect. The amount of urban land in the U.S. is predicted to increase by as much as 261,000 square kilometers by 2100, a more than doubling from the current 250,000 square kilometers, according to models developed by the U.S. Environmental Protection Agency.”

The continuous studies on cool roofs and their effects on climate change are still in their early phases. There are still variables that need to be factored in, such as location, temperature, and climate; in order to completely say that cool roofing can help solve global warming problems.

However, one clear benefit of cool roofs is their ability to insulate homes and protect them from excessive heat, thus generating energy savings for homeowners. Experienced roofers in the Palo Alto or Sunnyvale areas, such as Shelton Roofing, can install the right kind of cool roofs in a California home.

Likewise, competent roofers in Sunnyvale, Palo Alto, and other cities who pride themselves as being green companies, can be expected to observe energy-efficient and eco-friendly measures that will help in protecting the environment.

(Source: Cool Roofs Might Be Enough to Save Cities from Climate Overheating Scientific American, 14 Feb, 2014)