Aside from the more common asphalt shingle and metal, slate is another recognized material for roofing in Menlo Park, CA and all other locales around the nation. HomeAdvisor.com writer Matt Goering agrees, as underscored in this short excerpt from his article.

“Slate roofing tile has some huge upsides, mostly due to the fact that it’s a natural stone product, giving it a unique, beautiful appearance, and the longevity that slate is famous for.”

Being actual shingle-like slivers of rock, slate roofing tiles have mostly found their way onto the tops of more upscale homes. A more detailed explanation of slate’s numerous advantages is as follows: 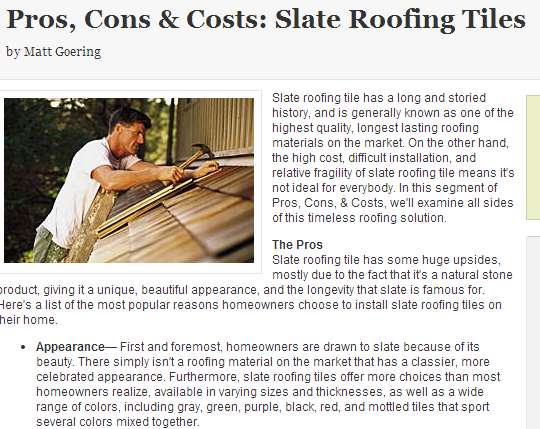 Great aesthetic appeal– We’ve got to admit, anything made from real, decorative stone is beautiful to look at. This is one of the main USPs (unique selling propositions) that slate has, making it a fairly popular choice especially for trusty Sunnyvale CA roofing servicers like Shelton Roof. As one could put it, there’s not really anything that can rival its classiness and appeal. What amplifies its beauty more is the availability of a wide variety of colors, sizes, and thicknesses. It can also be laid out in a variety of patterns according to a homeowner’s personal preferences.

Longevity– Slate roofing tiles are basically known to last between 100-150 years– which is amazing. Such longevity easily makes slate an unbeatable choice, especially when its counterparts are known to last for only 20 to 30 years at most. Due to this, slate is a common roofing material used in numerous historical properties, serving as testament to its endurance.

Fire resistance– Whenever a house catches fire, one can definitely say goodbye to typical roofs, but not slate. The material is basically invulnerable, contributing to its incredible durability. Slate’s fireproof qualities make it especially handy during wildfires, when using fireworks, or being adjacent to homes that aren’t as fireproof.

Eco-friendliness– Research indicates that each year, roofing materials comprise about 5 percent of the waste contained in landfills throughout America. With slate’s long lifespan, it can stay out of landfills longer. It also leaves very little in the way of carbon footprints: slate only contains an estimated 16 percent of embodied carbon per square meter of roof.

Between these traits and more, what’s not to like about a slate roof? If you’re looking for a roof that will definitely last (while adding more value and beauty to your home), then look no further than slate and experience the perks of using it firsthand.