According to an article on the information site CUFCC.org, roofers find it fascinating how a lot of people are clueless about metal roofing. Before, people were almost exclusively associating metal roofs with aged, rusty barns. However, this isn’t actually the case. 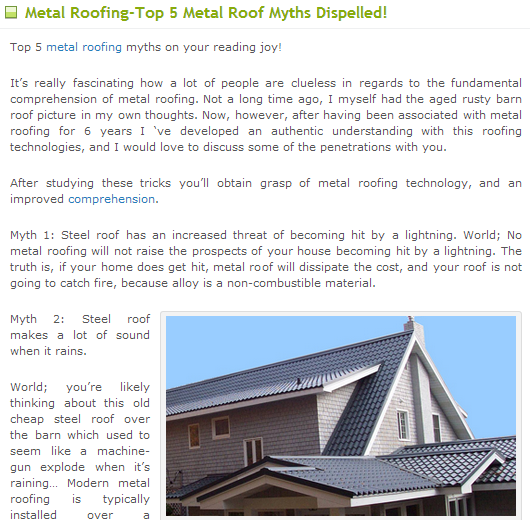 Here are some of the most common metal roofing myths and misconceptions debunked by actual professional roofers:

A metal roof increases the likelihood of a lightning strike. Just because it’s made of metal doesn’t mean that lightning will be attracted to it. For one, electrical current isn’t attracted by conductors; it merely flows through them. In fact, a metal roof is actually safer than its counterparts during lightning storms; they help dissipate the electric charge when it hits, and they won’t catch fire. Furthermore, lightning strikes are largely determined by factors like land topography, building location, and the size and height of the building itself.

Metal roofs are noisy when it rains. Metal roofs are typically installed over pre-existing sheathing known as roof decks, usually already equipped with insulating material. As raindrops hit the roof, the fixtures around it (i.e. wood) absorb the sound of rainfall. Such construction makes a metal roof as quiet as its counterparts and maybe even quieter on several occasions.

Metal roofs are easily dented. Standard metal roofs are built to be abused. Years of rain, high winds, snowfall, and rainfall won’t be enough to bring them out to pasture prematurely. There’s still a possibility that larger-than-normal hailstones will fall, which is pretty unlikely unless there’s a really huge storm looming. Homeowners can even walk on them if needed; like when installing a TV antenna, for instance.

Metal roofs are expensive. The answer’s both a yes and a no, because like all products, there are good, better, and best choices. Some companies offer their customers metal roof systems that fetch for a fortune, but others like Shelton Roofing offer far more reasonable options.

Metal roofs make your home colder in the winter, and vice versa. No they won’t, unless a house doesn’t have adequate insulation in place. If such is present, metal roofs practically have no effect on indoor temperatures.

Equip yourself with adequate information before working with dependable roofers in Menlo Park like Shelton Roofing. After all, it’s much better to know a little than nothing at all.