An article on AZFamily.com dated November 23, 2013 discusses the increasing number of roofing repairs required by Arizona locals following recent rains. While the weather wasn’t very rough, the rainfall was enough to cause leaks in many homes. The article notes that many homeowners chose to cover their leaks with tarps as a stopgap measure:

It has rained and it has drizzled, and the lingering wetness is causing last-minute problems for homeowners.

Some people have been purchasing tarps to stop leaks, but [Home Depot install specialist Duane Birch] emphasized that wet patch and tarps are only temporary fixes that do not solve the underlying problem. 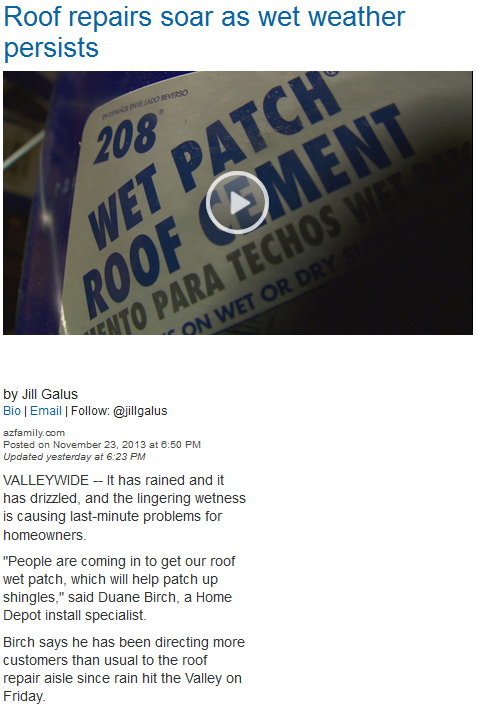 Birch said the bright side for people having problems now is that they will be better prepared the next time the sky opens up.

“It’s been a long drizzle, so a lot of people don’t realize it till the last minute,” he said.

Tarps are pretty capable of blocking out water, yet they are not meant to be a long-term solution for leaks. If a leak is left unresolved, it could lead to further damage and problems for a house. California has had its fair share of rainfall this season, and locals should not underestimate rainy weather, even if it brings nothing stronger than a drizzle. Homeowners in San Mateo or Santa Clara counties whose properties have leaks should consider having the cracks properly patched up by a contractor for roofing from Menlo Park, CA or Sunnyvale, CA.

Although leaks might seem small and harmless when they first manifest, they can get a lot worse if ignored. The water damage they cause can make wooden fixtures rot and ultimately ruin the insulation that lies between the roof and the ceiling. Leaks can also trigger mold growth that can further damage the house, as well as pose health hazards to occupants. In the absolute worst-case scenario, severe water damage can weaken a structure enough to cause the entire roof to cave in.

Adding a tarp cover prevents dripping, but it will not stop the rain from ruining the rest of the roof. Homeowners should call upon skilled professionals like those from Shelton Roofing to mend their roofing in Sunnyvale, CA or other nearby areas. Time is of the essence, and homeowners will want to resolve roofing leaks early to avert disaster.