Summer’s arriving soon and temperatures are expected to flare up all around California. Being in one of the warmest places in the U.S., your roof could be costing you money. Do you know that the color of your roof has a big impact on the temperature of your home?

Dark-colored roofs tend to retain heat and transfer it to the interior of a building. White or light-colored roofs, on the other hand, reflect the sun’s heat instead of absorbing it, thereby increasing a home’s indoor thermal comfort. According to studies, white roofs can produce energy savings of up to 15 percent every month. If you’re not taking advantage of a white roof, you’re definitely missing out on some valuable savings. 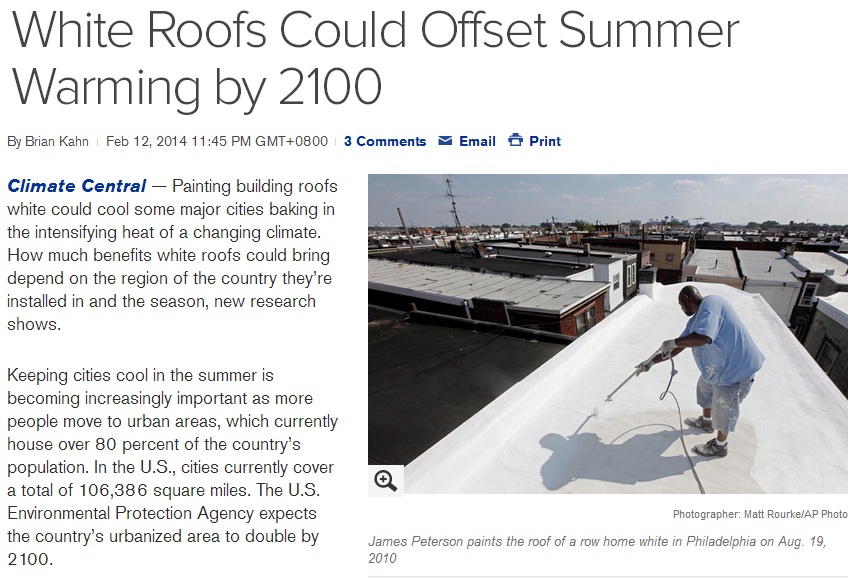 A Bloomberg.com article from contributor Brian Kahn divulges the advantages that a white roof presents during the year’s hottest season:

“Keeping cities cool in the summer is becoming increasingly important as more people move to urban areas, which currently house over 80 percent of the country’s population.

Greenhouse gas emissions are expected to force average temperatures to increase between 3°F and 9°F by the end of the century, depending on how much those emissions are cut back over that period.

These increases in temperature take on added importance in cities. There, the urban heat island effect, warming caused by paved and dark surfaces, can make temperatures as much as 10°F hotter compared to greener surrounding areas. Higher summer temperatures lead to increased energy costs and a greater occurrence of heat waves, harming human health.

One method of adapting to rising urban temperatures is painting roofs white to reflect incoming sunlight. New York has mandated white roofs since 2007 and other municipalities are considering following suit.”

There are two ways to achieve a white roof—you can have your roof painted white, as the Bloomberg article suggests, or you can have your existing roof replaced with light-colored shingles or panels. Either way, you’ll need a reliable Menlo Park roofing contractor like Shelton Roofing if you want the job done right.

People choose reputable experts in roofing and re-roofing in Menlo Park like Shelton Roofing because they are duly licensed by the State Contractor and accredited by the Better Business Bureau. They are also certified by the best roofing manufacturers in and out of California, and are fully committed to environmentally-friendly business practices.