As America’s population grows older, so too does the average American house; half of today’s households are estimated to be around 40 years old already. That said, the property condition research firm BuildFax says that many houses in the country may actually be a lot older than their occupants think. Specifically, they say that most residential roofing systems are very likely to have not been altered or changed by their previous owners, as Claims Journal describes: 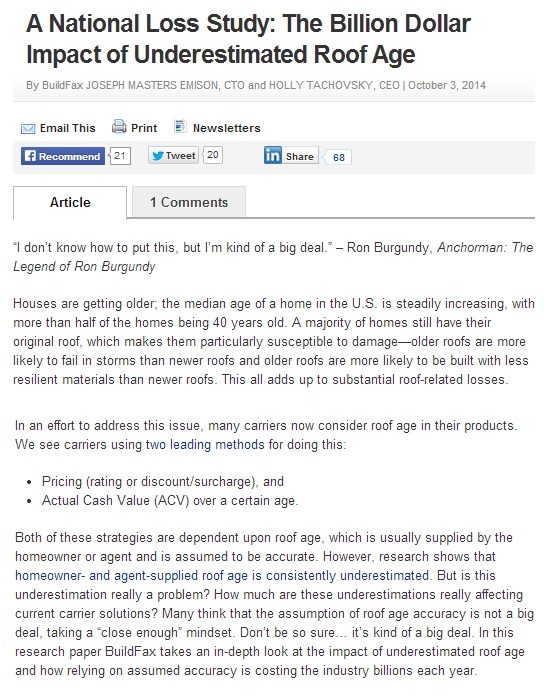 Based on BuildFax analysis of over 35 million policies, the median roof age is around 16 years old. The expectation would be to find half of the roofs on a carrier’s book to be younger than 16 and half of the roofs to be older; however, BuildFax research finds that the distribution of roof ages across a typical carrier’s book of business is skewed downward, with far too many roofs being categorized as younger than they actually are.

The result is that many American families may actually be living under a roof that’s no longer structurally sound. Thus, homeowners in California who aren’t sure about the age of their roof might want to give their local roofers a call and arrange for a roof replacement job right away. A respected Palo Alto roofing company that has decades’ worth of experience in the industry, much like Shelton Roofing, would know exactly when a roof must be replaced with a better one. After all, a leaking ceiling isn’t the only telltale sign of a roof that’s about to fail.

Loose granules in the gutters, for instance, could be an indicator that some parts of the roof are already deteriorating from sun and UV damage. Loose granules are most common in properties that use older roof shingles, although they can also be found in a brand-new roofing system due to the installation process involved. Thus, a thorough inspection must be carried out to know if the granules are truly a cause of alarm. Curled shingles, on the other hand, aren’t as ambiguous because they are clear indicators of moisture seeping into the ailing roofing system.

California homeowners can prevent these problems if they rebuild their roof with better materials. Luckily, a respected roofing company in Palo Alto, Menlo Park, and elsewhere are willing to guide them through the selection of long-lasting roofing options available in the market today. Metal roofs, which include aluminum, sheet metal, and copper possess a good balance of strength, beauty, and ease of installation. However, these are outclassed by slate tiles in terms of overall durability, assuming that the house can support their weight.

Given these information, perhaps homeowners might want to rethink what they thought they knew about their house?