The earthquake that struck Napa, California on August 24, 2014 left hundreds of people injured, many of whom were treated at the Queen of the Valley Medical Center. Unfortunately, the hospital itself also sustained serious damage during the event and repair crews are particularly concerned that the roof may have suffered serious water damage from broken water lines. According to the Napa Valley Register, total damage to the hospital is estimated to be worth around $4 million, and a fundraiser was recently held to cover some of the costs. 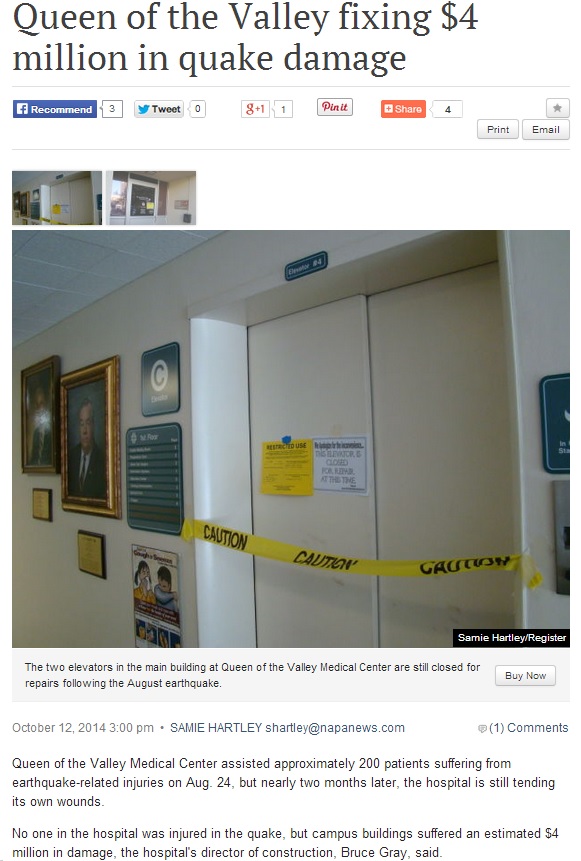 While it’s hard to assume that such a thing will never happen down south in Santa Clara County, at least the County has no shortage of experts who specialize in nonresidential repairs. For example, a company which possesses some of the best roofing contractors in Palo Alto, CA, such as Shelton Roofing, may primarily specialize in residential roof repairs, while also having significant experience working with apartments, office buildings, industrial sites, and of course hospitals. If any of these places suffer a leaky roof caused by a busted water pipe or extensive water damage due to a major storm, they can be trusted to help up with the repairs.

Extensive knowledge about commercial roofing systems is important because they aren’t designed similar to residential roofs. For instance, experts estimate that metal comprises about 20 to 30 percent of commercial roofs in the country. Now, it just so happens that metal roofs can fail when exposed to bad weather for long periods of time. Metal finishes can also eventually fade after decades of rain, snow, and sleet, which will lead to the proliferation of rust. Given that, therefore, there are about 20 to 30 percent commercial roofing systems that are vulnerable to leaks and deterioration on account of their material, plus the fact that the way they are constructed typically have plenty of seams, fasteners, skylights, and other roof features.

Those that specialize in commercial roof repairs in Palo Alto and elsewhere will know how to prevent these things from happening. First, they look out for bubbles, water puddles, and tears in the roof—all telltale signs of premature aging and/or rapid deterioration of the roofing materials. Next, they repair the damage using commercial-grade sealants like flashing cement (for roof flashings). If the damage persists despite the roofers’ efforts, they’ll replace the affected area of the roof with a new one.

Structural damage, such as those on roofing systems, must not be simply shrugged off, especially because of the very imminent danger it poses on the occupants inside the building. Ideally, therefore, professional roofers must be called in at the first instance of roofing system trouble.