U.S. weather forecasters are saying that there’s a huge chance that El Niño will develop in the Pacific Ocean this year, which could bring more rain for drought-stricken California and the rest of the southern U.S. states. USA Today’s Doyle Rice recently wrote about what Californians can come to expect from this periodic climate phenomenon:

“Relief for California’s devastating drought could be on the way later this year because an El Niño climate pattern is likely to develop in the Pacific Ocean, the National Oceanic and Atmospheric Administration (NOAA) reported Thursday.

El Niño, the planet’s most important climate phenomenon, shakes up weather in the USA and around the world.

“There’s a 65% likelihood that El Niño will develop by later in the fall,” said Mike Halpert, director of NOAA’s Climate Prediction Center. He said there’s a 50% chance of it developing as early as the summer.

A forecast from the Australian Bureau of Meteorology earlier this week was even more confident, predicting at least a 70% chance of an El Niño in the next four months.”

Although the rain that El Niño brings will be needed and appreciated by many Californians, it could take some homeowners by surprise if they’re not prepared for it. With that in mind, it’s time to ask yourself, is your roof ready for El Niño 2014? 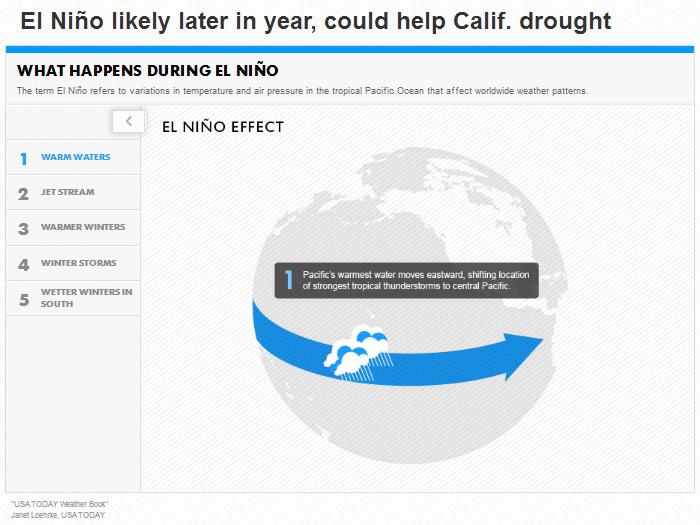 It’s easy to forget about your roof during dry times. It’s only when leaks occur that you begin to remember about the damage on your roof that needed repairs. Prevention is always better—and cheaper—than the cure, as they say, so make it a point to prevent drips before they start, or get worse, and have the roof inspected on schedule by a Palo Alto roofing professional before El Niño, or any severe thunderstorm, hits.

A thorough roofing company in Palo Alto, such as Shelton Roofing, can check your roof for stability, including potentially risky cracks and missing tiles, to ensure that it is in the best shape possible to withstand a major weather event, such as El Niño. These certified roofers can provide you with scheduled maintenance, leak detection, and repair and installation services that your roof needs. If you haven’t had your roof inspected yet this year, it’s time to give them a call.