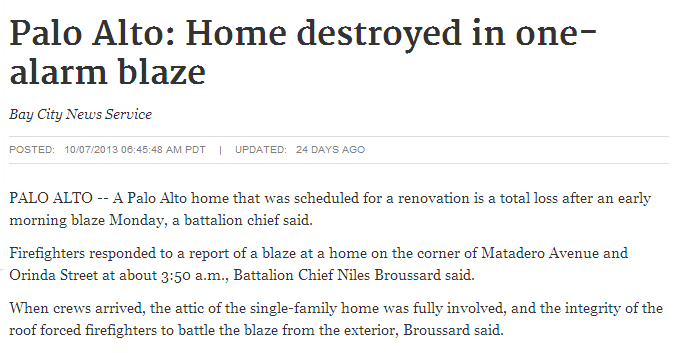 An October 7, 2013 article on mercurynews.com reported of a fire that gutted a Palo Alto home that was scheduled for renovation. According to the article, “Firefighters responded to a report of a blaze at a home on the corner of Matadero Avenue and Orinda Street at about 3:50 a.m. The early morning blaze apparently started in the attic of the house.

When the fire crew arrived, however, the attic of the home was already fully ablaze and the danger of the ceiling collapsing forced the crew to fight the blaze from the outside. With the roof finally collapsing, firefighting crews ultimately stamped out the fire around 4:15 a.m. The battalion chief, Niles Broussard, said that some firefighters stayed behind at the scene to work on the “hot spots” as of 5:55 a.m.”

Investigators have determined that the home had no power or gas and, while the home is presumed vacant, Broussard said it hasn’t been confirmed that no one was in the home.

The home appeared to be prepped for a renovation, Broussard said.

A next-door home was evacuated as a precaution, but no other structures were damaged in the blaze. No one was injured.

The danger of a house fire may be one valid reason to make sure your roof stands a good chance against fire. Fire-rated metal and asphalt roofing materials, for instance, make good replacements for
re roofing in Palo Alto homes. Homes with slate roofs are often reported to have been spared in neighborhood conflagrations where fire leaps from roof to roof.

This is why it is important to check the ratings of the roofing materials to learn the level of protection you can expect from the material. Class A roofing has the highest fire resistance rating as it can withstand even severe exposure to fire, while class B can tolerate moderate exposure to fire. Class C materials, with only minimal exposure, can be defenseless against fire.

Keep in mind that installing an unrated roof in your home can be risky and exposes your home to other other types of hazards than if you had invested in a rated roofing system. A re-roofing to a highly rated roofing material will also boost the value of your home; hire only trusted Palo Alto roofing companies like Shelton Roofing Co., Inc. to do re roofing jobs.