One of the most important parts of a house is the roof, as it not only provides protection to residents and the rest of the structure, but also contributes significantly to the home’s curb appeal. Palo Alto residents who are planning to build their homes will do well to look into various roofing types and decide on which one would work best for them. 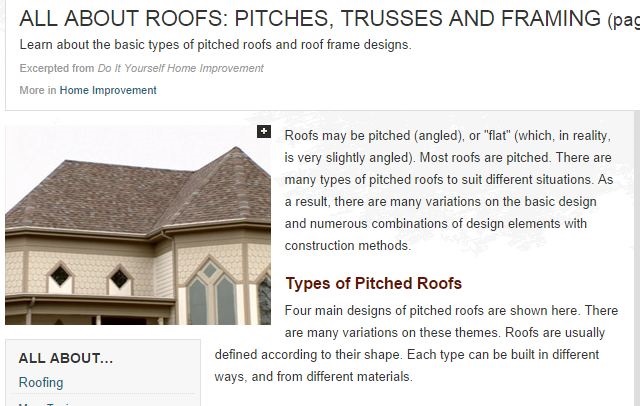 An article posted in DIYNetwork.com discussed some interesting roof types, classified according to construction. The article groups roofs as either flat or pitched.

Flat roofs are the simplest roofs to build, but Palo Alto roofing companies know that they have to be waterproofed properly, to make up for their limitations in shedding.

Majority of houses use varying types of pitched roofing due to its functional and aesthetic benefits. Below are some of these types.

Gable roofs have two sides joined together by a central ridge. They are also easy to construct, and are good for any climate. Windows or other ventilation systems may be built on the sides to allow proper air circulation. They are also suitable for building an attic, which is also good for ventilation.

Hipped roofs have four sides—two long ones, and two short ones. This is a highly versatile roofing style, and just like a gable roof, also allows for ventilation features, including windows and attics. Hipped roofs also come in several variations, including the pyramid, Mansard, bonnet and arched.

Pyramid roofs have sharp peaks, giving them their distinct pyramid shape. They are commonly used over smaller spaces.

Mansard roofs have sides with two slopes, the higher part being steeper than the lower part. These roofs are the most ideal for attics as it allows ample space inside.

A bonnet roof may be described as a combination of the pyramid and mansard types. It has a sharp peak, and has two slopes on each side, but the upper slope is steeper than the lower one. It is preferred for outdoor living spaces.

Then there are arched roofs. From their name, these roofs are curved and are usually made out of steel to provide maximum strength. Barns, storage houses, and warehouses use arched roofs because its design is good for drainage.

Palo Alto homeowners should carefully choose the type of roofing for their homes, as each one comes with its own pros and cons in aesthetics, functionality, cost, and maintenance. Additionally, replacements or reroofing for some types may be more difficult than others. Fortunately, seasoned Palo Alto re roofing companies like Shelton Roofing can be relied on to work on practically any type of roofing, and can be homeowners’ partners in addressing any roofing concerns.

(Source: ALL ABOUT ROOFS: PITCHES, TRUSSES AND FRAMING, DIYNetwork.com)